Except the demonstration by neo-Nazi bigots from all over Europe was bigger than the official shenanigans.

Marchers hung a banner which said, “pray for Islamic holocaust” and carried signs with slogans like “white Europe of brotherly nations”. Others chanted “pure Poland, white Poland” and “refugees get out!”

Although the country’s government condemned racist and xenophobic ideas, it called the event “a great celebration of Poles, differing in their views, but united around the common values of freedom and loyalty to an independent homeland”.

And it wasn’t just Poles.

The march, held on Poland’s 11 November Independence Day holiday, has drawn tens of thousands of participants in recent years. Extremists from Sweden, Hungary, Slovakia and elsewhere now join Polish nationalists in a public display of xenophobic and white supremacist views, since the event began on a much smaller scale in 2009.

The slogan for this year’s event is “We Want God”: words from an old religious Polish song that President Donald Trump quoted in July while visiting Warsaw. Trump praised Poland for what he described as the country’s defence of Western civilisation.

Part of the problem is that Poland is now ruled by the right-wing Law and Justice party. That isn’t helpful.

You would think Poles had learned a lesson from fascism. Evidently not.

This is what the European Union was established to stamp out. And the Conservative idiots want us out of it. How many more wars do they want and support?

We are governed by blithering idiots.

It took you an expensive referendum, but here you are, voting for gay marriage. At last.

Australian statistician David Kalisch announced the results in the capital Canberra, with 7,817,247 of the ballots cast saying yes, compared to 4,873,987 opposed to the idea, on a turnout of 79.5 per cent.

Across all six states in Australia, the yes vote won – ranging from 57.8 per cent in New South Wales to 74 per cent support in the Australian Capital Territory.

Tiernan Brady, director of Australians for Equality, said: “If this were a general election it­ would be the biggest landslide in Australian history.”

Finally. What a cliff-hanger

Some 61.6 per cent of the electorate backed gay marriage, against 38.4 per cent who opposed the move, the Australian Bureau of Statistics said.

Let’s see what the Australian parliament does with it. So many bigots elected to it, it’s hard to know.

Interesting to note that in the UK, gay marriage was instituted by a Conservative government, the one thing David Cameron did that won’t go down in infamy, as opposed to his Brexit referendum.

Not to say the UK doesn’t have its share of bigots, it does. People who hate gays, Jews, Muslims, women, blacks, browns, and indeed anything not lily-white Anglo-Saxon male heterosexual. They don’t care much for any European, either. The UK has a foetid history of bigotry. Hence Brexit.

So kudos to the Australians. It took you a while and you’ve a few steps more to go. But welcome to the club. We need you.

Well, isn’t THAT  a novel idea! MPs voting on legislation. Who knows, maybe May will consider introducing democracy into Britain.

And all because the number of Tory MPs willing to vote for a leadership election is approaching the magic number of 48. Plus she’s been taking instructions from Johnson and Gove.

She doesn’t have anyone’s confidence at this point.

And these are fairly simple changes.

Of course, they could have just demanded the entire bad idea be forgotten. Labour seems to think that the Tories are hell bent on a hard Brexit:

Brexit: Emily Thornberry predicts no deal with the EU

Speaking on the BBC’s Andrew Marr Show, Ms Thornberry said: “I think what we may be seeing is the Europeans trying to make it clear that it is not their fault that there are these difficulties – the intransigence does not come from their side, it comes from Theresa May’s side.

“And in the end I think the reality is the intransigence is on Theresa May’s side, because she doesn’t have the strength or the authority to be able to control her backbenchers, let alone her cabinet. And I think we are heading for no deal, and I think that that is a serious threat to Britain and it is not in Britain’s interests for that to happen.

“We will stop that.”

The things the Tories can’t deliver are settled status on EU citizens resident in Britain, anf a non-existent Irish border. The first because Tory extremists can’t stand the thought of immigration – all those nasty Europeans around – and the second because it’s a logical impossibility.

Compared with those, the Brexit bill is a minor matter. May has made kind noises about European residents, noises she likely can’t deliver on given the party she heads, but she hasn’t said diddley on the Irish border, because she has no solution to that. There is none.

May would rather Britain crash out of Europe without a deal than risk her place in Downing Street. And let the Irish Troubles start up again.

Theresa May slathered all over Trump after his election, but a visit isn’t scheduled. Thank whatever deity you like.

White House confirms Donald Trump ‘will not visit UK until 2018’

Donald Trump will not visit the UK this year, the White House has confirmed.

Press Secretary Sarah Huckabee Sanders said it “still hasn’t been determined” whether the US president would make a full state visit to Britain, following reports a planned trip had been downgraded.

Prime Minister Theresa May made the offer of a state visit – an honour usually reserved for a president’s second term – seven days after his inauguration in January, when she became the first foreign leader to visit him in the White House.

It prompted a wave of criticism and threats of mass protests. 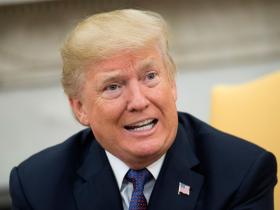 Donald Trump has insulted the UK one too many times

Mr Trump has subsequently visited France and Germany, but the president has yet to fly to London and diplomats were said to be discussing plans for a less controversial working trip, which would mean Mr Trump did not meet the Queen.

Trump isn’t fit to be a president. He hasn’t the intelligence, honesty, integrity, decency or even plain common sense to govern a country, let alone be the “leader” of the free world.

And for Theresa May to have invited this charlatan, liar, blowhard, egomaniac and narcissistic fool for a state visit says she’s completely clueless.

So she’s had a supper with European leaders – she isn’t one – and what has she achieved?

Despite her positivity, voters believe Theresa May is making little progress with the Brexit talks

A soft Brexit was always the Prime Minister’s goal, and for much of her premiership it has seemed beyond her grasp, frustrated by pressures in her own party and from the EU side of the talks. It may yet prove to be unachievable. Yet if some form of negotiated deal does become a reality in the coming months, it won’t be something to celebrate.

Whatever the terms are, they will be less favourable, by definition, than remaining permanently in the customs union and single market with a strong say on EU decision-making. The free trade deal could appear superficially attractive, and thereby reduce the chance of the final referendum on the settled Brexit terms that the British people deserve. No Brexit, it must be said, is better than soft Brexit.

No Brexit is a good one. Brexit means an isolationist Britain, with no influence in the world, not even in the Commonwealth.

Tories are deluding themselves.

…because the government can’t be sure of a majority.

And what’s the value of Theresa May’s words of reassurance to EU nationals resident here? Zero, nada, zilch. She can’t even depend on her own party and the DUP to deliver votes – Universal Credit, anyone? – and can’t control the hard-line Tory nasties who hate everything European, or at least want to keep it safely on the other side of the Channel. She can’t even assure us she’ll remain prime minister for the duration of the Brexit negotiations, so fractious is the Tory party.

The solution is to kill Brexit entirely. The consequences have become all too clear – recession, inflation, loss of jobs, loss of income, loss of rights, and long term rancour between Britain and what should be our European allies.

David Cameron was an imbecile to have a referendum in the first place. And we have never been governed by referendum. Let parliament consider the consequences. Even better, let’s have another election to force the parties to explain their policies in the light of Brexit consequences. Anything other than the chaos of Tories falling over each other to have Brexit at any and every cost.

EU referendum: The result in maps and charts

It was largely England. with a few pockets like London objecting to leaving. Scotland and Northern Ireland voted by large majorities to remain. And the government has yet to propose a solution for the Irish border in the event of Brexit. I think they haven’t a clue about it.

The leave vote was skewed by old farts like me. I wasn’t one of them, but it’s embarrassing nevertheless. We of all people should have appreciated the peace that the EU has brought to Europe. But no, my age cohort voted to leave and create chaos again. As if two world wars started in Europe weren’t enough. Morons.

I think – I could be wrong – but I think it was resentment against immigrants that fueled Brexit. Pure racism. I am the child of immigrants. I appreciate what immigrants have done for Britain. They’ve changed our culture forever and for the better. Think curries. And pierogi.

Yet the vote went against Europe, and against everything culturally valuable. Hate crimes against immigrants have increased since that day. The UKIP nasties have been parading in their Nazi regalia.

Maybe the solution is to have the European border around England, since its voters are so hostile to everything foreign. Let the Little Englanders prosper on their own.

Maintain close ties with EU to meet challenges of Brexit

Organisation for Economic Co-operation and Development

thinks Brexit is going to harm the British economy. It’s forecast to perform poorly afterwards, and actually isn’t performing all that well since the referendum and Tory intransigence to see Brexit through at any and all costs.

Banks and other companies are looking to relocate abroad, and who can blame them? The government can’t even guarantee flights to Europe will still be operating the day after Brexit.

Brexit is a total social and economic disaster, and even Theresa’s best buddy Donald is no help, as his administration slaps a tariff on airplane wings made by Bombardier. This is a taste of what abandoning the EU holds. No friends in Europe, and none elsewhere.

It’s time for a fresh idea, and Oor Theresa isn’t going to have one.

A semi-competent government might have have figured out a direction to go in, but with the Tory Idiots still fighting over who gets to drive the Clown Car, there is no resolution in sight, and Theresa May’s sad excuse for a government blunders on, bereft of all reason, purpose or direction.

Someone needs to put it out of its misery.