The Democratic Unionist Party has dramatically threatened to rethink its deal to prop up Theresa May in power if she compromises over the Irish border after Brexit.

Sammy Wilson, one of the DUP’s 10 MPs, said the party would not accept any moves that would see Northern Ireland “treated differently than the rest of the UK”.

Well… maybe not quite yet according to Mr. Speaker. However…

David Davis risks being held in “contempt of Parliament” after a row erupted over his refusal to release documents setting out the economic impact of Brexit.

The cabinet minister will now be forced to appear before a Commons committee of MPs next week to explain why he has failed to hand over the papers – despite a vote in Parliament demanding their release.

But as pressure mounted on the Brexit Secretary to give up the documents, Tory eurosceptics launched a counter-offensive pushing ministers to hold a second vote to ensure the papers are suppressed.

Oh, my! Whatever could the Brexiteers be afraid of? The exposure of their lies before the referendum?

What, in a supposed democracy, is there to fear from publication of reports on the potential consequences of Brexit? Its cancellation? Oooooh! Perish the thought. At the very least, it might fuel debate – ooops, sorry, I forgot the Tories think debate is the last thing we should have on this most fateful decision of post-war Britain. Who knows, a debate might result in The Wrong Decision, one that May and her cronies disagree with.

May’s misgovernment has strong anti-democratic instincts, and is not fit to continue in power. If parliament’s will is not to be done by a rag tag and bobtail of xenophobic Tory blowhards kept in office by Northern Ireland’s version of UKIP, then wash them away. Get rid of the scabrous bunch.

Ooops. The virtues of the free market. I noticed in other news a hotel in NY city was removing Trump branding, and his Florida Mar-e-Lago resort has been reduced to accepting bookings from far right organisations as opposed to charities who have been falling over themselves to cancel.

Apparently he has also benefited MSNBC’s – another media outlet accused of being “fake news” by The Donald  – advertising revenues, and the NY Times has reported a surge in subscribers.

For a lot of people, Trump is a toxic brand, resulting from his toxic personality and government.

The most threatening toxic waste dump in the US is the White House. 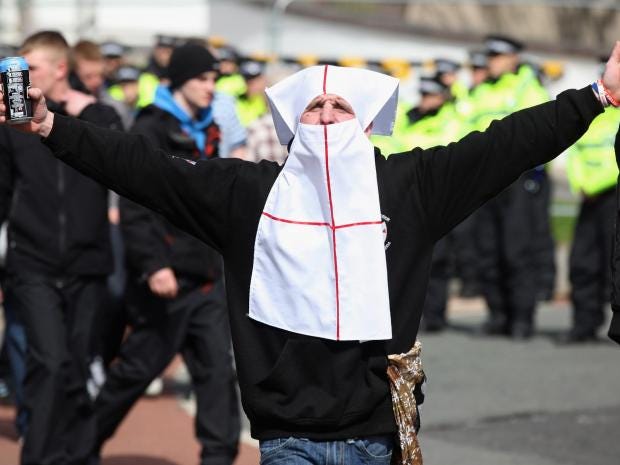 (One of the authors of the report.)

The report basically found, in two studies, that voting for Brexit correlated with three personality traits often associated with xenophobia:

These were right-wing authoritarianism and social dominance orientation – the idea that one’s group needs to fight for superiority in the world.

The third is a particular focus of Dr Golec de Zavala’s research, a trait known as “collective narcissism” – a belief in the unparalleled greatness of one’s country.

It’s fair to point out that, as some non-authors quoted in The Independent’s article emphasise, this isn’t a study of why a slender majority of British voters supported the disaster that is Brexit, and more factors than simple xenophobia are responsible for the outcome.

However, the conclusion is that if you are xenophobic, you are more likely to support an isolationist Britain that excludes pesky furriners. Not a very surprising conclusion, but one that should have been taken into account by David Cameron before calling for the foolish referendum in the first place, a ghastly mistake that will overshadow everything else he managed to accomplish, such as gay marriage. Also it’s worth taking into account in considering whether to reconsider the whole bad deal: is xenophobia a Very British Value?

Leaving a scent of putrefaction wherever she goes, the Mail Online columnist spoke at an event organised by the David Horowitz Freedom Center, a far right American group. In this delectable address, she made these comments:

“It’s such a pleasure to be amongst people that are prepared to fight for their country,” Ms Hopkins said, before telling  the cheering audience it was “our time”.

“We can commit to arm ourselves, not just with the help of the NRA,” she added. “Get furious and fight back.”

The speech, made in Florida earlier this month, went on to claim areas of Britain were controlled by a “Muslim mafia” and allege that there was “institutionalised discrimination against whites” in the UK.

Ms Hopkins railed against “Muslim men” and the “Muslim mayor of Londonistan”, referring to Sadiq Khan, who she claimed she “cannot stand”.

Apparently, even the Daily Mail thought this a journey too far. Unusual for them.

Don’t get me wrong. I’m an atheist and no supporter of religious fundamentalism of any stripe. Christianity in all its many incarnations, Islam, Judaism, Buddhism, Hinduism, Whateverism, can all take a hike as far as I’m concerned. Religion is an obstacle to be overcome rather than a blessing, and sometimes, religion has caused horrors.

But this blatant advocacy of persecution of one religion among many that have caused great ills is just another manifestation of fascism – another religion of a political rather than spiritual sort. It’s true that some of the greatest recent atrocities again civilisation have been committed by Muslim extremists, for example, the downing of the Twin Towers. However, to extrapolate from that to claim all Muslims are evil and deserve death… now that is a hate crime, as yet lacking only the execution to be comparable to the original terrorism.

Russian tentacles spread wide, it seems. Not just into the Trump campaign, but into the Tory misgovernment. At the heart of this, is the Legatum Institute, set up by Christopher Chandler, a financier who made a fortune as a majority shareholder at Russian gas company Gazprom.

Now his thinktank has been implicated in the drafting of a letter, sent by Foreign Secretary Boris Johnson and Environment Secretary Michael Gove, which urged the Prime Minister to ensure members of the Cabinet got behind plans for a hard Brexit by “clarifying their minds” and said they must “internalise the logic”.

“Clarifying their minds”… “internalise the logic”?? What logic?

Certainly, Russia has an interest in seeing Europe collapse. Better to deal with a disunited continent, where you can play one country against another, than a solid economic bloc including many ex-Soviet satellite nations.

It’s absurd to suppose that  people who made a fortune from the collapse of the Soviet Union aren’t involved with Russian oligarchs today. And no surprise at all that Russians are trying to influence witless fools in Britain as well as the US. Looks like Boris, Gove and the Donald were all gulled into pursuing Russian interests. Well, they are all narcissistic idiots.

No deal can be secured on the Irish border after Brexit until the end of trade negotiations with the EU, Liam Fox has said.

The Tories would rather risk a hard-won peace in Northern Ireland than abandon a reckless Brexit because of their disdain for Europeans. I suppose we get the government we deserve. Only who among us, besides Tory voters, deserved this?

Why should the rest of us suffer because of Tory obstinacy and stupidity?

EU demands in next round of talks set to enrage Cabinet Brexiteers, leak reveals

Well, well, well… I think that would enrage anyone. It’s not an acceptable POV. Any toddler told by its parents what to do without having a say in the matter might feel a tad irate. What to do, what to DO???

One could storm off in a huff, though probably not very far. Hardly into the bosom of a Trumpist USA, or a dominant China.

Or, one could just reconsider whether the current course of action is a prudent one. Britain with the cooperation and support of its European partners is in a strong international position. Ex-Britain is just that. A washout.

True, we can’t to anything and everything we want while in the union, just when we want it. But, to switch metaphors, the pack is is stronger together. Just as Europe is stronger with Britain in it, rather than being an offshore headache, we are better off siding with European economic muscle.

Rather than wrecking Britain by leaving Europe in a huff, wouldn’t it be more sensible to stay in and reform it? Europe is going to be there with or without Britain’s input. Better to have influence over its development and constitution than to be an offshore island embattled by its storms.

It was a Conservative, Ted Heath, who, for all the flaws that came to light afterwards, had the vision to see Britain as part of Europe, and now it’s another Conservative, a Maggie Thatcher Wannabe, the dolorous Theresa May, who wants to destroy it to save a political career that has already failed. She’s no Maggie – well, just as well, really, it would be no credit to her if she were.

Oh, the irony. The Tories flipping and flopping without any central purpose.

It’s a steam powered rocket to boot. It will launch the daunty loonie over the Mojave Desert in an effort to prove the earth is flat. “I don’t believe in science,” Mr Hughes told the Associated Press (AP). “I know about aerodynamics and fluid dynamics and how things move through the air, about the certain size of rocket nozzles, and thrust. But that’s not science, that’s just a formula. There’s no difference between science and science fiction.”

Well, good luck with that. Science is full of formulas and equations… it’s what scientists distil much of their work into.

And if after this weekend, we have one fewer moron to deal with… hey, who’s complaining?

Between the Creationists and the flat earthers, there are a lot of idiots competing for air time. If they cull themselves, it’s a blessing. Of sorts, not the divine kind.

Looks like he chickened out from becoming the new nominee for the Darwin Awards but blamed the government! Says he’ll do it some day soon, going up there, some day soon! 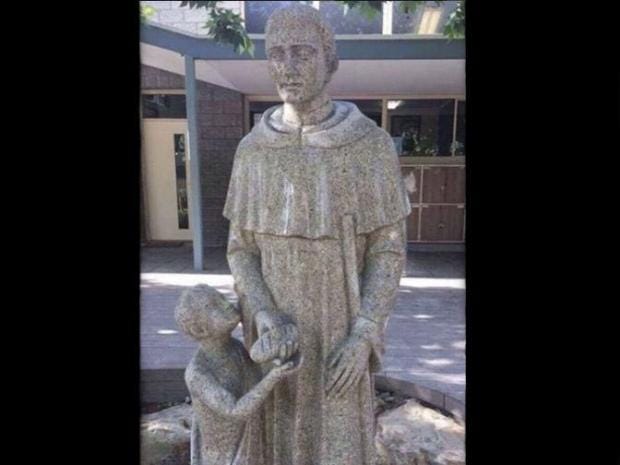 Oh, the irony. Maybe not so much suggestive as prophetic?